Christmas Town was a success this year

Christmas Town in Norwood, Ohio, held on Saturday, December 1, was a big success despite the rain. Several children took advantage of the free pony rides, sponsored by Netburg Services.

A lot of the emphasis of Christmas Town is to allow for fun activities for families with children of all ages at minimal cost.

Many families struggle to provide entertainment for their children every holiday season and this helps parents do that.

Why is the sign upside down on the horse trailer? It only had grommets on the bottom! Next year, we'll add grommets to the top.

Posted by Netburg Webmaster at 11:13 PM No comments:

Netburg Services has been updated on Yelp

It's the New Year and I'm back working on LinkedIn. As I now have over 500 connections, I'm working on pruning the connections that I follow to improve my LinkedIn News Feed.

Today was exciting in that I claimed my Yelp listing. Located at https://www.yelp.com/biz/netburg-services-cincinnati, it had been set up by hibu earlier. The basic information was good; I just had to tweak it a bit. (hibu has a full range of digital marketing services and I recommend them. I have been a customer for many years. If you are in the Cincinnati area, I can connect you to my representative.)
Posted by Netburg Webmaster at 5:00 PM No comments:

Taking a break from LinkedIn

During the next week, between Christmas and New Year's Day, I'm going to take a little break from LinkedIn. I had a goal of getting 500+ connections by the end of the year ('cause the "500+" looks nice on my profile) and I accomplished that.

During this week, I'm going to think about what I want to see in my LinkedIn News Feed. I'm getting too many "I hired this person even though they had a bad review" posts. Many of those, some of which are plagiarized and some are fictional, really don't help me.

In 2018, I'm going to follow all my connections that I unfollowed in 2017 and see what they're posting now. Then I will begin unfollowing people who either post things, "Like" things or comment on posts that I don't want to see. Let's see if the guy who posted daily, "There is no box" has found his box yet. I found it was fairly easy to get rid of the daily Cheddar posts which feature nice toys that I would never buy and were just promotions for a TV show that I never watch.

I would like to reach out to all of my connections, if only to ask, "How are things going in 2018?"

I'm tempted to finish this with "Do you agree?" but frankly, I'm not looking for approval. I just write things and let my readers decide whether it's relevant for them or not.

(Cross posted on my LinkedIn page.)
Posted by Netburg Webmaster at 10:36 PM No comments:

Posted by Netburg Webmaster at 11:39 AM No comments:

Watson on Jeopardy!: The end of the Microsoft/Intel computer era

On this day five years ago, IBM's Watson competed against Brad Rutter and Ken Jennings on the game show Jeopardy!, winning the competition. (The actual competition happened January 14, 2011 with the first broadcast of the two episodes on February 14 and 15, 2011.)

To me, this event marked the end of the Microsoft/Intel computer era that we have been living in for so long and the start of the Watson era, which continues today. To my knowledge, Watson's software and hardware does not contain much, if any, Microsoft code or Intel processors.

The Microsoft/Intel computer era was an age where cheap software running on cheap hardware was king. It was an era where Version 1.0 was garbage and everyone waited until at least Version 1.1 came out. It was an era where Intel microprocessors would take arbitrary text and execute it as a program (allowing over 30 million viruses and other malware to date).

Sadly, other companies fell into this trap of bad software with bad security. Adobe Systems is a leading example of this. In the Watson era, Adobe's Flash is near the end of its life.

I graduated from the University of Illinois with a degree in Computer Science (College of Engineering) in 1976. Some of the best practices of that time were simply ignored by Microsoft and Intel and have only been rediscovered in this decade, some 40 years later. What if the cars of today were designed and built with the technology of the 1970s? Air bags and antilock brakes would not be included. People would be furious! But many business people didn't want to pay for good-quality hardware and software over the last 40 years, so they bought technology that was poorly designed even for the 1970s.

What is different about the Watson era of computing? IBM's Power Systems servers, like the ones running Watson, running the IBM i Operating System have multiple parity bits (including error-correcting memory) and other checks to prevent memory errors and even adder errors from corrupting the operating system, user programs or data. These processors and operating system require that programs be compiled by a compiler and will not run arbitrary text as a program. I know of no viruses or worms that run on IBM Power Systems (with the caveat that there may be malware that affects the two other operating systems that run on IBM Power, AIX and Linux). Ironically, many of IBM Power Systems do run antivirus software, but not as much for themselves: They do it to detect viruses affecting Microsoft/Intel systems which have been uploaded into their file systems by infected computers (how ironic)!

The IBM i Operating System, including its predecessors going back to 1979 (longer than any Windows Server has existed), have always more robust than Windows Server. Today they can manage multiple workloads in multiple virtual machines without conflict or crashing and dependable resource allocation. It's not unusual to have a 10-year-old Power Systems server that has never crashed. There have been cases where one IBM Power Systems server has replaced over 100 Windows and Linux servers. There are companies that have 15,000 active users working on one Power Systems server with sub-second response time.

What did the end of the Microsoft/Intel computer era and the start of the Watson era five years ago mean for the typical computer person? For many, nothing. Companies will still buy cheap: They can buy Windows 2012 R2 running on a server with an Intel processor for less than $1,000. They will still pay lots of money to load this system up with antivirus software, which is unlikely to block zero-day vulnerabilities, and pay technicians to keep this system running and to restart it when it crashes. They will continue taking the server down to install monthly patches from Microsoft. If they need another function, they will buy another server, and another, and another... I know a company that buys a skid of servers with Intel processors (at least 20 servers) whenever they have a planned power outage to replace the servers that will not boot up when the power comes back.

But there's another group of companies out there which understand the false economy of the Microsoft/Intel world. These companies will spend the money for better servers and operating systems, without the need for antivirus software for their operating system, and end up with better results with a lower cost of ownership. And many good computer people will work for these companies, because they don't want to deal with things keeping them from writing dependable programs which can run 24/7 without having to deal with crashes and glitches.


Notes: I have donated $10 in both 2015 and 2014 to Wikipedia for its operations. Have you donated?
This is cross-posted on my personal blog, The World According to Bruce.

(I'd include Ramadan but it was in June and July this year.) 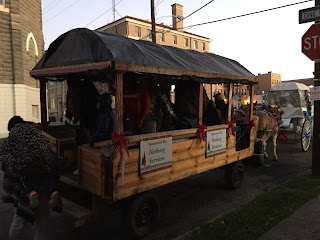 Also, the Norwood Police Department had a Shop With a Cop event recently. Funding was provided by the Greater Cincinnati Police Association. Netburg provides partial funding to this program through the Greater Cincinnati Police Association. I don't feel comfortable including a picture, but here is a link to pictures provided by the Norwood Police Department.

It's been a hectic year at Netburg and it isn't over yet. We're hoping your year went well and that 2016 will be better.
Posted by Netburg Webmaster at 10:03 AM No comments:

"Bait and switch" with Staples coupons

Look at this coupon for "20% off ink" from Staples (UPC code omitted): 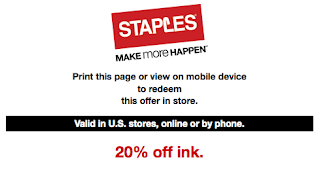 Now read what it says: "Excludes all toner, Epson® ink and toner, HP ink and toner..." What the heck, Staples? The last printer I bought from you was an HP printer and now you going to require that I pay full price for ink for it? When HP will sell it to me for a discount? Why do I even do business with you when you do a "bait and switch" on me like this and waste my time?

I unsubscribed to further emails from Staples. I sent a message to my Staples representative and it bounced with this notice: "Your message couldn't be delivered to the recipient because you don't have permission to send to it." (sic)

The next time I need office supplies, I'll check around and try to find someone with everyday low prices, not a company that keeps sending coupons that don't apply to me anyway.

Update June 29, 2016: "Your message couldn't be delivered to the recipient because you don't have permission to send to it." is a Microsoft Outlook euphemism for "The recipient is no longer with the company."

Posted by Netburg Webmaster at 4:19 PM No comments: